What are different types/methods & ways in Software Testing? 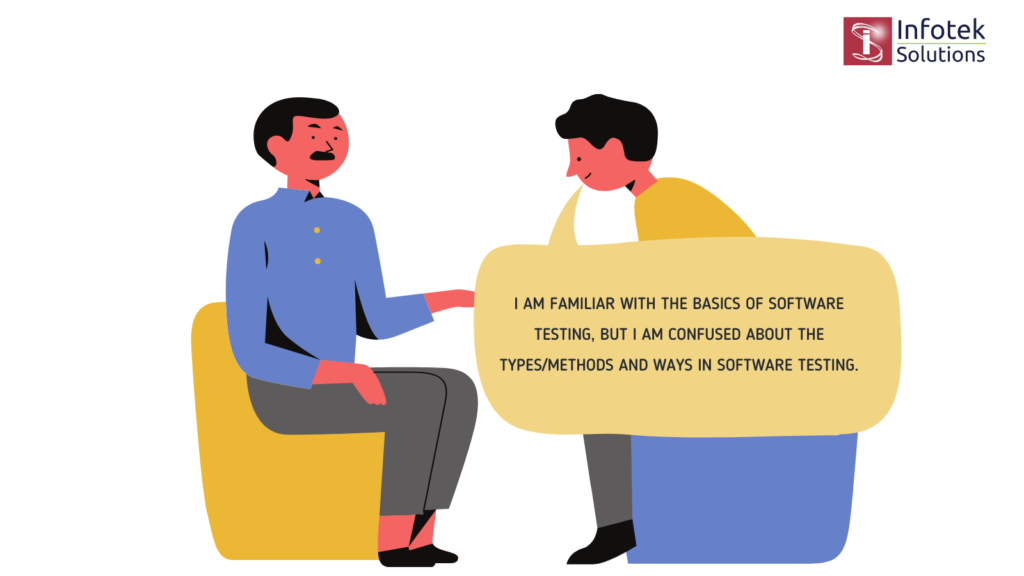 Testing is the final step before the application is released to production and should be done at every stage of development. Software testers must utilize both manual and automated testing in order to ensure that the final product is the best it can be.

There are three types of roles that focus on testing in an organization:

You can learn more about the specific types of software testing and how to go about properly testing your product by reading further.

What Are the Different major Methods of Testing?

Accessibility testing is the process of ensuring that your mobile and web apps are working and usable for users without and with physical conditions.

Acceptance testing makes sure that the end-user can achieve the goals of the business requirements. This decides whether the software is acceptable for delivery. It is also referred to as user acceptance testing (UAT).

To know more about UAT testing, please refer to the following link:

What is User Acceptance Testing(UAT)?

Black box testing is testing a system without knowing the code or how it works.

To know more about Black box testing, please refer to the following link:

End-to-end testing is a method of testing an application from start to finish to make sure everything works the way it should.

Functional testing ensures an application, website, or system is doing exactly what it’s supposed to be doing.

Manual testing, also known as interactive testing, is used to create and facilitate manual tests for those who don’t use automation and collect results from external tests.

Integration testing makes sure that a whole system meets a set of requirements. It is done to make sure that the entire system works correctly.

This type of software testing process looks at how the software works when many people use it at the same time.

Performance testing measures how well a software application works under a heavy load.

Software regression testing is done to see if changes in the code break the application or use up more resources.

Sanity testing is done after bug fixes to make sure the bugs are fixed and that no new issues were introduced by the changes.

A single-user performance testing checks that the application under test does not overload the system. When the system is under load, this benchmark can be used to define a realistic threshold.

This type of software testing makes sure that a software application works well. It is done at the beginning of the pieces of software development to make sure that the most important parts of the program work well.

Stress testing is a type of software testing that pushes a system to its limits to see how it will respond.

Testing small pieces of code to make sure that they work on their own is called unit testing. This reduces the number of wasted tests and thereby speeds up the testing process.

White box testing is a type of testing that looks at the design, code, and architecture of a product to make sure the input-output flow works and to make the design, usability, and security better.

There are 3 ways you can do testing.

To get more information related to the difference between Manual Testing and Automation Testing, please refer to the following link:

What is Low-code/No-code Testing?
What is UML?